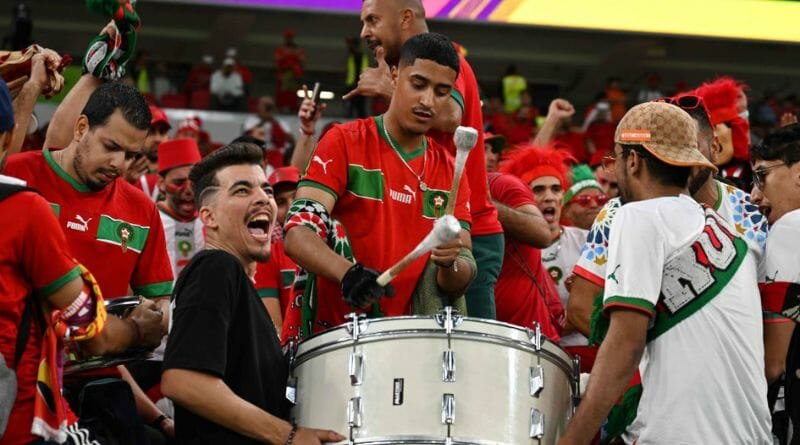 After their team was defeated 2-0 by France, Morocco’s ambitions of becoming the first African country to reach the World Cup final were dashed. People gathered throughout Morocco, Europe, and Qatar, the host country, in the hopes that they could defeat their erstwhile colonial masters. Theo Hernandez and Kylian Mbappe’s goals propelled the world champions into the championship game, but it was not to be.

The BBC was told by a fan in Casablanca, “We lost, but we’re quite pleased.” Given that France is home to hundreds of thousands of people with Moroccan ancestry, there was a significant police presence in central Paris for the event. Supporters gathered on the Champs Elysées raised the flags of various North African nations in addition to the Moroccan flag.

In other European cities, such as Brussels, where Moroccan supporters have previously celebrated triumphs in their campaign with flares and pyrotechnics, riot police were seen. The weather and the result appeared to limit fans’ post-match festivities in The Hague, Netherlands. After the game, flares were lit in the street, but Dutch Moroccans told the BBC they were attempting to maintain order.

However, a spectator at the Mohammed V stadium’s fan area in Casablanca claimed the semi-final outcome was “fine,” adding, “It’s the game.” The World Cup run by their team in Qatar, according to many spectators, was only the beginning of a bright future for Moroccan players. As their team struggled to score, spectators at Casablanca’s oldest cafe grew increasingly irate.

It was “time for Africa to lift the World Cup,” according to one supporter who was born in Morocco but raised in France. Moroccan spectators were also there, watching the match in a sizable tent set up on the grounds of the Casa Arabe cultural center in Madrid. Authentic Moroccan pastries were distributed while supporters yelled for their team. Despite everything, Inas, an English teacher from Rif wearing a jersey from the Moroccan national team, told the BBC, “I am proud of our squad.”

“They represented more than just football; by drawing attention and respect from around the world, they delivered us a symbolic victory in so many ways.” When France’s second goal was scored, Munir, a Casablanca native who works as a gas station attendant, was sad but continued to be upbeat with a group of friends. The Moroccan squad reaching the semi-finals, he claimed, was “a once in a lifetime experience.” “Even our kids will never see this again. For us, it has meant everything.”

As the final whistle rang, Moroccan supporters, cheered loudly in Cricklewood, a neighborhood of north-west London, in the United Kingdom. The supporter’s pride in their team’s performance was palpable there. Moroccan citizens huddled beneath blankets in the chilly weather to watch while sipping tea and smoking shisha.

In Cafe Prego, there were Tunisians, Algerians, and Egyptians. One supporter who thinks the World Cup in Qatar has been the best one ever and has brought the Arab diaspora in London together remarked, “We are all one nation.”

With a 2-0 loss to France on Wednesday, Morocco’s hopes of reaching the World Cup final were ultimately dashed. But the team’s amazing trip and their success in making it to the final four in Qatar will live on in indelible memory.

Morocco’s voyage has undoubtedly been the highlight of the 2022 competition, whether for the tens of thousands who attended the match in person at Al-Bayt Stadium, the millions who watched in the Arab world, or the billions tuning in on every continent.

They undoubtedly deserved the outpouring of pride and admiration from their fans at the final whistle and perhaps deserved more from this game than what they received. Their narrative may not yet be ended, as the Atlas Lions’ triumph in Qatar may only be the beginning of an illustrious new chapter and build the groundwork for additional ones.

The incredible triumphs over Belgium, Canada, Spain, and Portugal over the past three weeks will live in infamy even if they do not lead to any additional successes. In the end, Morocco’s injury-ravaged team simply couldn’t handle France, the defending champions, who were just a little bit too clinical for them. This was their sixth game.

The two teams will still face off in a play-off for third place on Saturday against Croatia, which will be a fitting way for them to finish the competition because they drew scoreless in their first meeting. It will be their last opportunity to display their red shirts in front of those beautiful fans, who truly deserved a goal to cheer on on Wednesday.

Given that they outnumbered French supporters by at least ten to one, those supporters made sure that Morocco won the contest of the national anthems. Even though it was a home game for Morocco, Nayef Aguero, the central defender who missed the victory over Portugal due to a thigh strain, was unable to rally and had to leave the crucial match during the warm-up, forcing Achraf Dari to take his place.

Probably, France wouldn’t have grabbed the lead after only five minutes if the West Ham United defender hadn’t been on the field when Theo Hernandez half-volleyed the ball into the net beyond Dari’s helpless kick.

Morocco’s defense froze for the first time during the tournament, and the AC Milan left-back sprang up at the far post to capitalize on the unusual disarray.

Additionally, it was the first time Morocco had trailed in a game during the competition. Even though the French were always going to be a challenge, Morocco now faced an especially challenging obstacle. After taking a big breath, the North Africans immediately resumed their participation.

Soon after, Hugo Lloris made a commendable save in response to Azzedine Ounahi. But after 17 minutes, Olivier Giroud sprinted past Romain Saiss and struck the post with a powerful shot. Relief was mixed with dismay as the motion revealed that the captain, whose thigh was still braced from his hamstring injury that required him to be stretchered off during the victory over Portugal, had not yet fully recovered. The fact that Morocco was left with just their two regular center-backs was not promising.

However, Morocco began to have the upper hand as France continued to look threatening on the break. Defender Jawad Al-magnificent Yamiq’s overhead kick produced a superb save from Spurs goalkeeper Hugo Lloris, who pushed the ball into the post. With the Arab squad fighting back strongly from the early loss, the game was truly on the line. The players provided sufficient proof that they could never be written off.