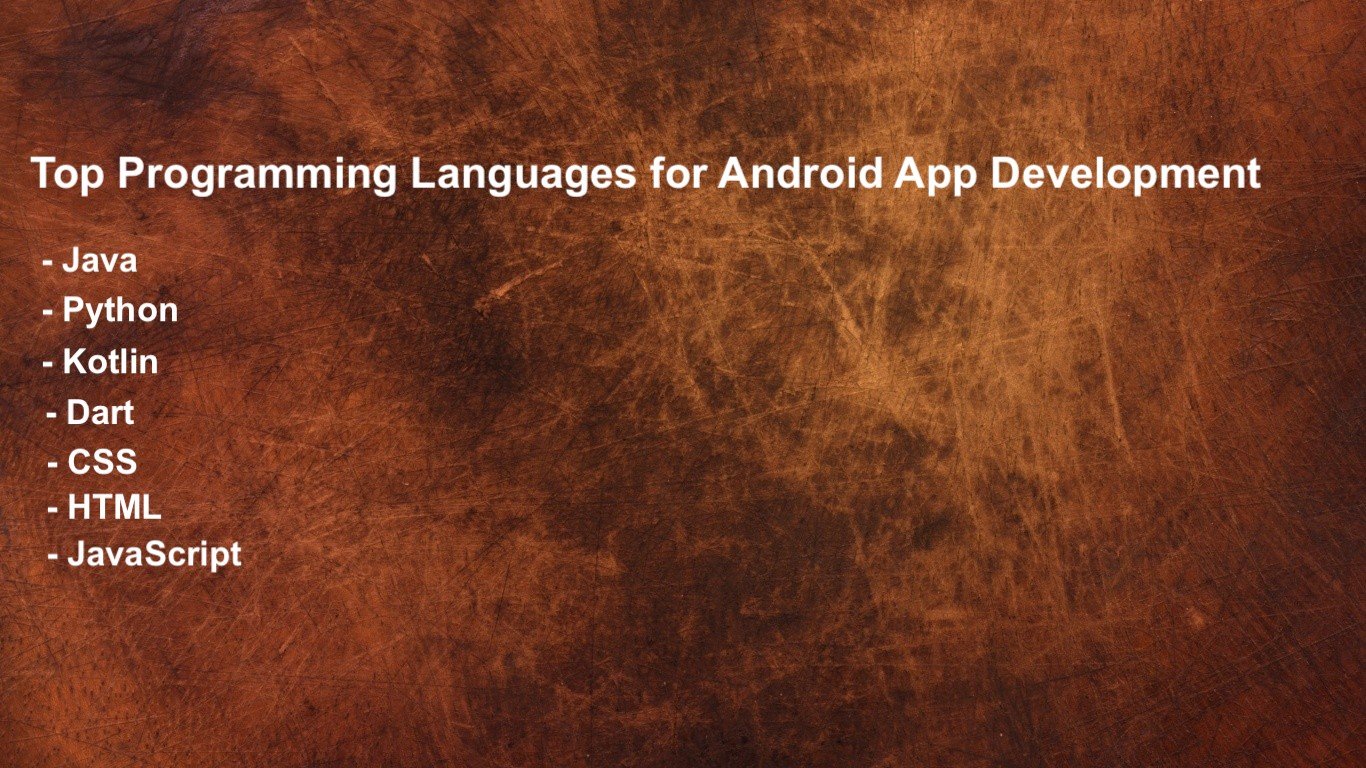 The world has been going mobile for a while now. People are no longer just browsing the web on their desktops and laptops. A growing number of people are accessing the internet via their smartphones, especially in developing countries with high growth rates.

Android app development is one of the biggest growth industries of our time. The popularity of smartphones is driving an increase in demand for new and innovative apps

These days, App developers can use the programming language of their choice. With so many alternatives though, it can be difficult to determine what will best meet your needs, especially if you’re new to mobile app development.

Top Programming Languages for Developing an Android App – Which Language to Choose?

When it comes to app development, Android is the best option. Android is a free, open-source software platform built for mobile devices. And the best part is that it’s used in more than 70 percent of the world’s smartphones.

Since there are numerous languages to choose from, choosing the right one can be challenging. In this post, you will read about the top 5 most suitable programming languages for android app development.

While Java is a powerful language, it can be difficult for beginners to grasp because of its complexity. It contains such topics as constructors, null pointer exceptions, concurrency, and checked exceptions. Also, the Android SDK takes the difficulty to a new level!

To sum up, Java is a fantastic language with which to develop Android apps. However, it can be tricky for beginners who prefer to ease into things and then learn more advanced concepts later on.

The Kivy library, which is an open-source Python library used for developing Android apps, allows rapid app development. It’s also cross-platform and supports both Android and iOS. However, there are some downsides to this – Kivy isn’t natively supported, so there won’t be any native benefits.

Kotlin is a cross-platform programming language that may be used as an alternative to Java for Android App Development. It was also introduced as a secondary “official” Java language in 2017. Kotlin can interoperate with Java, and it runs on the Java Virtual Machine.

Kotlin simplifies some of the unnecessary features of Java, such as null pointer exceptions. It also eliminates the need to end each line with a semicolon. In short, Kotlin makes Android app development much simpler for beginners and it can also be used as an “entry point” for developing Android apps.

Dart is an open-source programming language that powers the Flutter framework, which has been getting a lot of attention lately because of its ability to deliver beautiful, high-performance applications across multiple platforms in less time.

The reason why so many companies are adopting Dart as their primary language for application development is that it provides a solution for real-time apps that work across all platforms. Unlike other languages for Android app development like Python or Java, it comes with a virtual machine that can run on different platforms without any modifications or changes needed by developers.

The key selling point of Dart is that it’s developed by Google and optimized for fast apps on any platform. It makes UI development easier with features like hot-reload, which lets developers see changes instantly while working on an app. And it has fast performance, compiling ARM and x64 machine code for mobile, desktop and backend needs as well as JavaScript for web apps.

Android apps can be created using HTML, CSS, and JavaScript using the Apache Cordova framework that is powered by Adobe PhoneGap. The PhoneGap framework allows web developers to use their existing web development skills to create hybrid apps that are shown through “WebView” but are packaged like an app.

While the Adobe PhoneGap framework can be used to develop basic Android apps, it relies heavily on JavaScript programming and can take a lot of work to build even a simple app. Therefore, it is often recommended to choose any other from the list of top programming languages.

While talking about programming languages for Android app development, here’s the thing! If you are already familiar with JavaScript, learning React Native is easier than you might think! It is an open-source framework that can help you develop beautiful and powerful hybrid apps.

Using React Native means your app will be on Android and iOS both, so hybrid app development is becoming increasingly popular. If you want to start a career in software development, it’s a good idea to learn React Native.

Not all the top programming languages are created equal. Unfortunately, the past decade of mobile app development has grown increasingly complicated with different languages produced—especially when it comes to Android app development.

With so many options available and so much more on the way, it can be difficult to know which one to choose. However, as Google pushes Android further into the mainstream, we continue to witness a high influx of game-changing programming languages for Android app development out in the market.