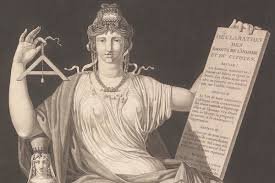 On August 26, 1789, the French National Constituent Assembly approved the Declaration of the Rights of Man and of the Citizen, becoming a fundamental legacy of the French Revolution; which has a universal value, and formed the basis of the United Nations Declaration in 1948.

This document served to disseminate in the political community the first Constitution of France, and represents the first printed version of that text. Its historical significance is immense.

In 1789, the people of France caused the abolition of an absolute monarchy and created the platform for the establishment of the first French Republic. Just six weeks after the sudden attack on the Bastille, and just three weeks after the abolition of feudalism, the National Constituent Assembly adopted the Declaration of the Rights of Man and of Citizens inspired by the American declaration of independence of 1776 and in the philosophical spirit of the eighteenth century, marks the end of the Old Regime and the beginning of a new era, considered a precursor document of human rights at the national and international level.

The declaration of 1789, like the texts of the English Colonies seceding from the mother country, the Declaration of Independence of July 4, 1776, the Declaration of the Good People of Virginia of June 12, 1776, and later the first ten The amendments to the Federal Constitution of 1787, which were approved in 1791, are the last link in a first generation of human rights, which started in the 16th century in the framework of a concern of the bourgeoisie to limit the power of the modern Absolute State.

Within the declaration we can find that “natural and imprescriptible” rights are defined as freedom, property, security, resistance to oppression. He argues that the necessity of the law follows from the fact that “…the exercise of the natural rights of each man has only those limits that assure the other members of the same society the enjoyment of these same rights”.

Therefore, the Declaration sees the law as “an expression of the general will”, intended to promote this equality of rights and prohibit “only actions harmful to society”. Likewise, it recognizes the equality of all citizens before the law and justice. Lastly, it affirms the principle of the separation of powers.

Consequently, the National Assembly recognizes and declares, in the presence of the Supreme Being and under his auspices, the following rights of Man and Citizen:

Article 1.- Men are conceived and stay free and approach in privileges. Social qualifications must be established on normal utility.
Article 2.- The motivation behind any political affiliation is the security of the regular and imprescriptible privileges of Man. Such freedoms are freedom, property, security, and protection from mistreatment.
Article 3.- The guideline of all Power lives basically in the Country. No body or individual might practice any power that doesn’t explicitly radiate from it.
Article 4.- Opportunity comprises in having the option to cause all that doesn’t damage others. Thus, the activity of the normal freedoms of each man just has as limits those that ensure different Individuals from the General public the happiness regarding these equivalent privileges. Such cutoff points still up in the air by regulation.
Article 5.- The Law just has the privilege to deny acts that are unfavorable to the Organization. Nothing that isn’t disallowed by the Law can be forestalled, and nobody can be compelled to accomplish something that it doesn’t structure.
Article 6.- The Law is the outflow of the general will. All Residents reserve the option to add to its arrangement, actually or through their Agents. It should be no different for everybody, both to secure and to rebuff. Likewise, since all Residents are equivalent under the watchful eye of the Law, every one of them can introduce themselves and be chosen for any open poise, position or work, as per their capacities and with next to no differentiation other than their excellencies and aptitudes.
Article 7.- No man can be blamed, captured or kept, besides in not entirely settled by the Law and in not set in stone by it. The people who demand, issue, execute or have erratic orders executed should be rebuffed; be that as it may, any resident who is required or caught under the Law should obey right away, and is liable in the event that he stands up to.
Article 8.- The Law ought to just lay out rigorously and clearly vital punishments, and one must be rebuffed by temperance of a Regulation laid out and declared preceding the wrongdoing, and legitimately applied.
Article 9.- Since any man is viewed as blameless until pronounced liable, on the off chance that it is considered fundamental for capture him, any thoroughness that isn’t important to hold onto his individual should be seriously subdued by the Law.
Article 10.- Nobody ought to be irritated by their viewpoints, including strict ones, as long as their appearance doesn’t upset the public request laid out by Regulation.
Article 11.- The free correspondence of considerations and sentiments is one of the most important privileges of Man; consequently, any Resident can talk, compose and print openly, as long as they answer the maltreatment of this opportunity in still up in the air by Regulation.
Article 12.- The assurance of the freedoms of Man and of the Resident necessities a public power; thusly, this power is initiated to support all and not for the specific advantage of those to whom it is endowed.
Article 13.- For the upkeep of the public power and for managerial costs, a typical commitment is fundamental, which should be disseminated similarly among the residents, as indicated by their abilities.
Article 14.- All Residents reserve the option to confirm, without anyone else or through their delegates, the requirement for the public commitment, to acknowledge it uninhibitedly, to screen its utilization and to decide its master rata, its base, its assortment and its term.
Article 15.- The Organization has the privilege to demand records of its administration from any Open Specialist.
Article 16.- An Organization wherein the assurance of Freedoms isn’t laid out, nor the division not entirely settled, misses the mark on Constitution.
Article 17.- Since property is a sacred and holy right, nobody can be denied of it, aside from when public need, lawfully demonstrated, obviously requires it, and depending on the prerequisite that there is fair and earlier pay.