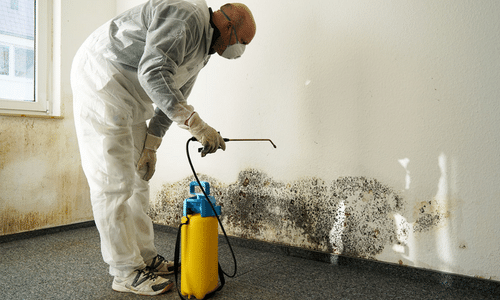 T:  Mould Inside Walls: Top Sign, Causes and Tips on Dealing with It

D: How to spot a mould problem, kill the mould and fix your home. Whether it’s black mold on your walls or toxic mold growing in your home, we speak to experts and have tips on how to remove the goo from your walls.

Mould growth is the most common and hazardous outcome of water damage. Getting rid of mould is easy when it’s visible, but what if you can’t even detect it? Well, that happens in the case of mould inside your interior walls. You won’t be able to see those black patches to tell the depth of the issue. However, we are here with a detailed guide on how to kill mould on walls. Read the post till the end to figure out everything. Here we for carpet water damage cleanup :

Causes of Mould Inside Walls

Mould can develop because of flooding. It can be difficult to prevent mould cleanup issues if your property has recently experienced flooding. Your house will get soaked, and it can take some time for it to dry. It could take weeks to dry your home. That indicates that there is a significant chance of mould formation. Keep in mind that mould might start growing in just twenty-four hours.

A home with poor ventilation poses a mould risk. Lack of ventilation results in pockets of wet, stagnant air that will promote the development of mould. Humidity is caused by steam and water evaporation. To be cycled outside requires maintaining a regulated moisture level.

The most frequent reason for the growth of mould is water spilling from a pipe. The worst leaks are those that are hidden, such as those that occur inside walls or above ceilings. Mould festers in hidden leaks, and the mould may already be spreading.

It’s possible for roof leaks, such as pipes dripping into the attic, to be undetected until the mould has already spread. Make sure you routinely inspect your attic for any leaking to guarantee it is in great shape. Keep a watch out for water stains, particularly on the ceiling near the attic.

4. Water in the Foundation of Your Property

Watch out for any water accumulation near the foundation of your home. If there is a lot of water, this could cause difficulties with your home’s foundation. By sloping your yard away from your foundation, you can avoid rainwater from collecting at the base of your house. In the same vein, moist basements are another offender. In most cases, basements don’t have good ventilation. That suggests that basements may have higher levels of humidity or moisture than other rooms in the house. Additionally, because basements are frequently colder, more condensation forms there, which increases basement humidity.

How to Deal with Mould Inside Your Walls?

It is advisable to leave the mould removal process to a group of specialists unless you are a certified mould specialist. Self-treatment may unnecessarily exacerbate your symptoms and any underlying issues. You can find up spending more money later trying to treat your worsened symptoms, which are a direct effect of the mould if you try to do anything yourself.

So, are you looking for specialists that can help you clean mould? Look no further! Emergency Flood Restoration Canberra is here to take care of the mould inside your walls. Contact us now, and we will find the best solution to secure your property’s structure, health and well-being. Hurry Up!