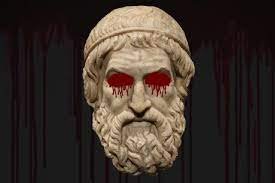 Just as Oedipus the King reflects a power struggle that blinds Oedipus, clouding his critical thinking, preventing him from seeing the reality that surrounds him, we could make an analogy with today, where that struggle and blindness is consuming a people suffering from of the plague that throughout decades of apathy fades away like poison ivy that contaminates everything in its path.

The plague that is spoken of in Oedipus the King, we could interpret it to date as all the factors that influence the day to day of a civilized society and that in one way or another affect the quality of life and the development of that community as They are: inflation, famine, economy, health, education, among many other socioeconomic axes. This plague is not new, but it was accelerated during the COVID-19 pandemic, which began in early 2020 and, although with a smaller scope, is still in force.

In ancient Greece, oracles were beings that could communicate with the gods through runes and thus predict the future. The oracles of today no longer use runes or magic, they are more sophisticated. This new class of oracles are the ones that manage the hegemonic means of communication and, although predicting the future is no longer profitable, they have been adapting to the changes of the times and new technologies. We enter a world of overinformation or infodemic.

The fight between two political factions is in decline, social networks are going deep and wearing down ideological extremes, introducing a range of political referents with conflicting opinions, where each one tries to leave their subjects satisfied, but who must be associated in some way to access real power, thus forcing them to iron out rough edges and sign agreements between their teeth at the time of their application if they want to have the possibility of accessing the highest-ranking positions of power. The reality of a society exhausted and not satisfied enough with its leaders, makes us ask, not who will be crowned king, but what will be left to reign.

We could infer that these networks act as not too faithful transmitters of the word of the oracles —the media— further diversifying popular opinion. They feed and distribute information or disinformation according to their ideology, since in one way or another each individual expresses through these networks their agreement or not, their ideas, their desires and failures, without having a sufficiently critical idea, since in these media —social networks— the information is very diversified but concise, thus generating a systematic rotation and without further analysis of phrases or situations that are massified within the social bubble, to which each individual or groups of these belong. .

The generation of these bubbles and the different understandings or comprehension of different situations, forces the political system as a whole to have a greater plurality of ideas in the solutions or proposals that these actors must carry out and thus bring about that the dissidences between actors of the same group increase, the unions of these diverse ideas are visualized in the short term in societies, since obviously not everyone can be satisfied and popular disbelief only increases as time goes by.

All the individuals of a people are emerging from society itself, we must as such respect and enforce a scale of values, life is above all. It happens that the breaking of social contracts, the inability to be able to access a better socioeconomic level, either due to lack of own merit or due to external situations, forces us to find a culprit and thus comfort ourselves; in these extreme situations the leaders are to blame, they are pointed out either by action or inaction.

The event that occurred on September 1, 2022, labeled as an assassination attempt, in which an attempt was made on the life of Vice President Cristina Fernandez, can be considered as a clear example of what happens, when the signals that descend from some actors at the highest levels of political power, whatever their ideology, not only do not give clear solutions, but they become commentators on reality, their own reality, or the reality that each one wants to show in their own way with their reasons mistaken or not, some blinded by their anger, others by impunity, others by the desire to be crowned king, do the impossible to leave their opponents out, while in their wake they continue to spread the plague that poisons the people.

Much was said, hypotheses of all kinds were proposed and as the investigation progresses new actors are being discovered, it is no longer just a lone wolf who produced the attack, there are others, it would be uncertain to date to say how many more, but everything would indicate that it was planned by a group of young people who with ideas let’s call them, revolutionary, crazy or any word that could try to describe them, they produced the attack on Cristina Fernandez.

Perhaps it is time to reflect and coldly think about what she means to many fellow citizens, we cannot refer to her as another emergent of our community, she is also an emerging political power that throughout her life has managed to harvest love and hate making her the most influential power figure of our days. There are those who idolize her to the point of fanaticism, but there is also an opposite extreme that does not share her ideals at all, despite this, there is an intermediate society that only seeks to grow and develop, that does not agree with either extreme, that many Sometimes they are forced to choose one of them, but when they see time pass without observing important changes in their reality, they cause them to feel again, in a short period of time, that uneasiness and helplessness typical of someone who is abandoned to their own devices.