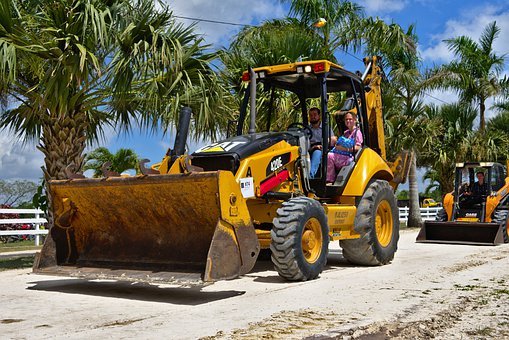 Though it’s sometimes difficult to tell a backhoe and an excavator apart, they differ in three main ways: size, versatility, and rotation. These factors make each machine suited for different jobs, so it’s important to choose the right one for your project.

The main difference between the two machines is size — excavators are larger and heavier, while backhoes are slightly smaller. The excavator is typically a better fit for demolition projects, mining, driving piles, drilling shafts for rock blasting, and overall large-scale industrial projects. The backhoe, as the smaller and more adaptable of the two, is better for farming, snow removal, loading jobs, and medium-scale construction and excavation projects.

The backhoe and excavator are also very different in terms of versatility. Though both machines offer a number of attachment options, the backhoe has a much greater selection and is therefore capable of a wider variety of tasks. Backhoes can also be driven on roads, which makes them the better choice for projects with spread out worksites.

Finally, backhoes and excavators have different rotation ranges which make them very different machines from an operator’s standpoint. An excavator operator can rotate the entire machine’s chassis and arm together in a complete circle, while a backhoe’s arm only pivots across a range of about 200 degrees.

The best way to determine which machine is right for your project is to learn the ins and outs of each.

What Is a Backhoe?

A backhoe is an excavation machine consisting of a standard tractor base that supports a digging bucket on the end of a jointed two-part arm. The opposite side of the backhoe will often have a front loader attachment (in which case the backhoe is technically called a “backhoe loader”), so the seat swivels 360 degrees to allow the operator to face whichever side is being used at the time.

The part of the backhoe arm that’s attached to the tractor is called the boom, and the segment that holds the digger bucket is called the dipper or dipper-stick.2018 Kubota backhoe The pivot that connects the boom and dipper is called the king-post. There is a wide variety of attachments available for a backhoe, like drills, hammers, rippers, rakes, breakers, and more. The front loader can also be replaced with different brooms, plows, and forklifts. In some cases, a backhoe can even serve as a crane by looping the straps of a lifted object over the dipper stick.

The term “backhoe” can be confusing because the digging bucket is actually on the front of the machine. But the backhoe’s name actually refers to the way that the machine digs by pulling earth toward itself, or backward, rather than pushing it forward like a traditional shovel.